This year’s Bunbery Bashes had an Ashes theme and raised thousands of pounds for the England U17 cricket team, The world cup winning England Women’s Cricket Team and Eric Clapton’s Crossroads Antigua Foundation.

Hosted by Rory Bremner, the evening’s entertainment included the comedian Peter Kay, The RPJ Rock Band and Eric Clapton and his band. The audience was over 1100 strong and included the likes of Freddie Flintoff and Sir Ian Botham.

Chris said “I had a very enjoyable night and even managed to get one of my favourite didges signed by Eric Clapton just before I started to play to the assembled stars!” 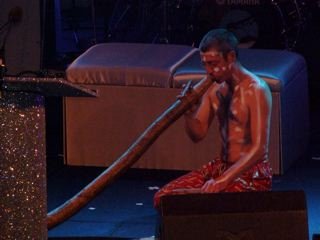 36 thoughts on “Chris gets his favourite didge signed by Eric Clapton at a charity doo in London!”