Get a Free track, MAGPIE, from my album FUNDIJERI here 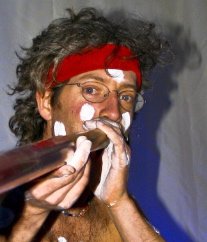 Thanks for being curious.

Curiosity was one of the things that got me into playing the didgeridoo.

I was at a festival in the early 90’s, listening to a band called Kangaroo Moon.

There was a fiddler, a pianist, a white fella playing drums with vibe of a tribal African, bass player, another member playing a mandolin or something… and then the paints stuck his mouth into a tube and an amazing drone came out..

What was that sound?! How was it being made? It supported all the other musicians in a dreamy, raw, earth and oddly percussive way…

A year later I was working in an apothecary which also sold world music tapes and CD’s, and had a few didgeridoos on a stand in the corner.

I taught myself to play when there were no customers in the shop.

And then people started to come and listen to me play.

At risk of blowing my own trumpetidoo I am now more than just a didgeridoo player – I am also didgeridoo teacher, didgeridoo performer and storyteller based in East Devon. I am also a publisher and nature connection/outdoor educator- see www.wholeland.org.uk for more details.

I started teaching didgeridoo in Cranleigh Prep School in 1997 and visited over 200 different schools to deliver didgeridoo events since then.

I am now known by thousands of school children as “the didgeridoo man!” in schools across England.

I have played with many different musicians and bands over the years, and to name drop, here is a list of a few: Jabberwocky, The Joyce Gang, Hawkwind, Baka Beyond, Paul Robertson, Andy Letcher, and Kizmet.

I played didge to Eric Clapton and some of England’s finest sports personalities at an Ashes themed charity event at the Grosvenor Hotel, London, during May 2009. It was quite nerve racking! I opened the evening by playing to an all star audience over 1200 strong at the Bunbury Bashes, in the Great Hall at the Grosvenor Hotel, Park Lane. I even managed to get one of my didgeridoos signed by the great guitarist.

The another side to my livelihood is quite symbiotic with didgeridoo playing. I am also a self-employed bushcraft, didgeridoo, environmental art, nature awareness, outdoor play and storyteller. I started trading as wholeland – creative outdoor learning & training based in nature during 2001 and now run workshops in schools, train teachers, run foraging courses and bushcraft and outdoor play campsTo me, Didgeridoo playing is about getting in contact with the breath and the spirit of the place. My nature connection work is about reminding people we are part of nature.

In 2009 I wrote my first book I LOVE MY WORLD – now a best selling playful hands on nature connection guidebook.I have now facilitated away days and events for companies such as BP, South West Water, the NHS, Investec Investment Banking and East Devon District Council.

I am aware that ‘The didgeridoo Man’ is a whitefella playing a blackfellas traditional instrument, so I am respectful and get painted up to remind myself I am part of the land – (as an aboriginal man in a suit in Cheltenham once told me to do!), I also make some of my own didges and tell stories in the public domain. When I get painted-up an extra £20 is donated to Survival International.

I have also produced a wonderful CD called FUNDIJERI.